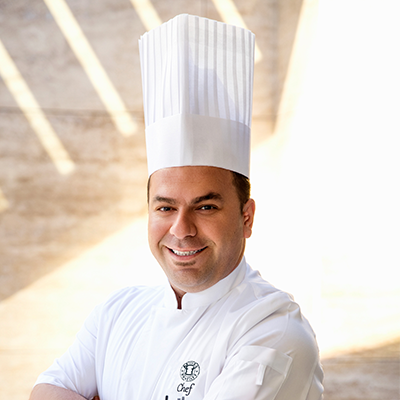 Chef Rafet İnce, born in Ereğli, Konya in 1981, started his career at Tekirdağ Anatolian Vocational Tourism High School. Thanks to the state scholarship he was granted, he attended “Le Cordon Blue College of Culinary Arts” and “Toscan-Cascina” to receive F&B training and complete his internship.
Chef Rafet, who won countless medals in many international culinary contests on behalf of our country, is the only Turkish chef to have won 3 Olympic medals for Turkey in “IKA – World Culinary Olympics” in 2008. Chef, who is also the founder of the first official “National Culinary Team” under “Turkish Culinary Federation”, offers consultation services to domestic and international corporate companies as well. He attended a great number of seminars, conferences, and panels as a lecturer and a speaker at vocational schools of tourism and hotel management, and universities that provide gastronomy education, in addition to playing a key role in pioneering various civil society initiations that were appreciated by the people greatly.
He presented cooking shows on various national TV channels: Gülbence (TRT-1), Saba Tümer’le Lava Mutfağı [Lava Kitchen with Saba Tümer] (Show TV), Ramazan Sofrası [Ramadan Table] (TRT-1), Zahide ile Yetiş Hayata [Catch the Life with Zahide] (Show TV), Melek Baykal (Star TV), Pişir-Yedir-Kazan [Cook, Serve, Win] (Kanal D), İyi Fikir [Good Idea] (TRT-1). Chef Rafet, a member of “Chaîne des Rôtisseurs”, has been the Chief Editor at BBC Good Food since 2008, a journal published in London. He is the author of the first self-improvement and gastronomical career book in gastronomical canon. In 2017, he won the best culinary author award for Turkey at the “Gourmand World Cookbook Awards”, considered as the “Oscars for writers.”

He currently works as the Executive Chef at the pearl of the Anatolian side in Istanbul, Wyndham Grand Kalamış Hotel, which was chosen as the best business hotel in Europe.

All speakers
Time and date

09/06/2019 11:00 09/06/2019 12:30 “Meat Culture and Healthy, Reliable Meat Consumption” Recipe Workshop and Tasting Event with Chef Rafet İnce With the Main Sponsorship Bonfilet, Chef Rafet İnce will be at WorldFood Istanbul Show Kitchen! To learn more about meat culture, and get hints and tips with regard to healthy and reliable meat consumption, do not miss this complimentary workshop and tasting event.